After reading my last post, a friend of mine (who hadn’t really considered that puzzle levels could be designed) asked me if the tile colors of puzzle levels were designed as well. The answer is that it really depends.

Your typical “swap” tile matching game generates tiles completely randomly upon initial setup (except for things like not having matches before the player’s even had a chance to take a turn). This has a few advantages. A player who just experienced a loss knows that it’s random, and maybe their next initial setup will be more favorable. This is especially important for the free to play market, where retaining players is the arguably the single most important element to success. That feeling that “Maybe I’ll have better luck next time” makes them much more likely to click on the Retry button.

That’s not to say that they don’t sometimes have fixed pieces. This happens, and when it does, there’s always a reason for it. For example, let’s have a look at level 22 of Cookie Jam: 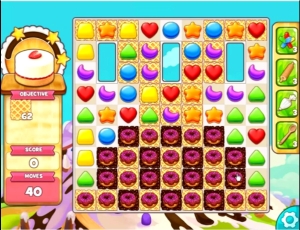 The level objective is to clear all of the wafer tiles. They’re functionally equivalent to the jellies from Candy Crush. There are also those donut obstacles. They can be swapped, but they can’t be matched. The only way to get rid of them is to make a match next to them. These donuts cover up 30 of the map’s 50 waffle spaces. 12 of these donut-covered waffle spaces are also chocolate waffle spaces, which act like Candy Crush’s double jellies.  The player needs to match 62 cookies on these spaces, but the donuts are blocking 42 of these necessary matches.

The cookies are generated randomly, but look at the right side of each of these maps. Every time this level is generated, there are two tiles that can be swapped that will match five cookies of the same color. This gives players an optimistic start to the level, since matching five cookies feels good, and also generates a rainbow cake that will eliminate all cookies of any color it is matched with.

The actual benefit of the rainbow cake this early in the game is marginal at best. When it’s created, it’s going to be sitting in the bottom right corner, with a donut on its left. The only color the player can use it to eliminate is whatever color happens to be right on top of it. Is the rainbow cake useless, then?

No! Far from it. In this level, its purpose isn’t to be used. Its purpose is to be created. When the player sees that 5-cookie match, they go for it because they want that rainbow cake, but its real purpose is to clear away three of the donuts and give the player a foothold in the lower right.

When the level begins, the easiest place to make matches is along the top edge of the donut structure. Because of the voids in the level, though, vertical matches are difficult. The left side is practically impossible to match, since it’s not only a map edge, but also constrained by the donuts. Same situation in the right, except for that five-cookie match. Once that happens, the right side is much like the top edge of the donut structure: In practical terms, you can really only match parallel with it, but you do have another row (for the top edge) or column (on the right edge) to swap tiles with.

You might wonder why they don’t just have the donuts on the right removed at the start in the first place. My feeling is that because this is a bit of an intimidating level to start, throwing in a free rainbow cake encourages the user. It also gives them an additional edge they can work with, while preserving the level’s pleasant symmetry. People love symmetry. It also serves as a nice reward for players who hold off on using the rainbow cake, since they can use it near the end of the level to collect difficult wafer spaces.

So, there you have it. An example of a Match-3 level where tile placement is fixed. It’s a different color each time, but mechanically-speaking, it’s always the same, and it serves a very clear purpose.

Posted by Grant on August 9, 2014 in Game Thoughts