The purpose of appointment mechanics is to make make playing the game into a habit, a routine part of your day. Remember that a free to play game lives or dies based on its ability to retain paying players, and a player is really only likely to become a paying player if they stick with the game for longer periods of time. It’s impossible to emphasize this enough. Retention, retention, retention. This isn’t limited to free to play games, either. If you’ve ever played an MMORPG, you’ve probably seen daily quests. Games with a focus on multiplayer or social elements may also have these, such as Animal Crossing’s fruit, Pokemon’s berry plants, and Nintendogs’ contests.

Come to think of it, all of those examples are from portable Nintendo games. I’ll have to examine this more closely in a future article.

Anyway, let’s look at some examples of appointment mechanics in games. I’m going to use Marvel: Avengers Alliance as an example here because it’s managed to retain me as a player for over two years, and I just hit the level cap this morning.

The game, like most free to play games, has an energy system. It costs 10 energy to initiate the core game loop (fight a battle), and it caps at 60 energy. Energy replenishes at a rate of one point per six minutes. This all boils down to a player being able to fight one battle per hour. A player gets up in the morning, burns through a few fights, goes to work, burns through some fights over lunch, returns to work, goes home, then players some more. That’s habituation right there.

In addition to the regular gameplay, ranked PvP battles and puzzle-like simulator challenges also require the expenditure of energy. However, this is a specialized form of energy that does not take away from the regular energy pool, so a player that engages in PvP or simulator challenges  loses nothing by engaging in the normal mission structure. I should note that “practice” PvP matches do not cost energy, but also provide no experience.

Players can use the flight deck to send their collected heroes off on remote ops missions. The heroes are unusable for a while, but when they come back, they’ll get a little experience and currency for your trouble. The experience your heroes gain might seem to break the “No experience without an energy cost” rule, but hero experience and player experience are different things. The real point here is that they bring back silver, M:AA’s soft currency. It’s like an invest/express game where you plant a crop, wait for some time, then collect your money. The real benefit here is that players get to choose their own timer and set their own appointment and expectation of when they’ll play the game again. 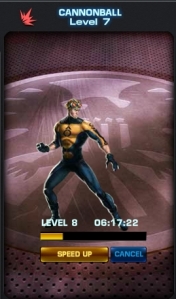 When heroes get enough experience to reach their next level, they need to train before they can gain more experience. While training, a hero can’t be used, but once you’re done, you can unlock new skills or equipment slots. This gets people looking forward to coming back. The higher a hero is in level, the longer it takes to train them. A hero that’s been used a lot is going to be missed more, and the player is going to be even more invested in seeing that hero come back from training. 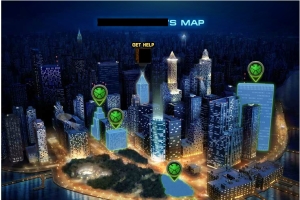 Once per day per Facebook friend, you can go visit their cities and collect rewards. This is especially valuable when special events are running that require a special resource called Unstable ISO-8 to participate.

There’s a limit on how many gifts you can claim from friends each day. This is separate from the friend-visiting mechanic. I’ll go into this in more detail when it comes to social mechanics, but the general point here is that if you see a lot of a resource that you want (especially Unstable ISO-8!), you want to claim the gifts as often as you can. 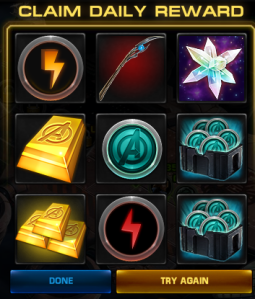 While a PvP tournament is running, players can earn a random daily prize if they manage to win five battles. The player isn’t just being asked to come back to the game. The player’s being asked to participate and really get involved.

Not only do you get a random reward for logging in, you also get a daily reward that improves in quality based on how many consecutive days you’ve logged in. This is an extremely powerful appointment mechanic that really deserves its own article.

Whew! I covered a lot. I hope this was educational. Still, that’s ten different types of things a player is waiting for, and that’s just in this one game. On top of that, only four of those things are tied to daily resets. Everything else is on a visible timer that ticks down while players watch and wait (Or break out their wallets to fast-forward). Like with energy mechanics, these can be monetized, but their real purpose is to make a game into a habit.

Posted by Grant on August 26, 2014 in Columns, Game Thoughts