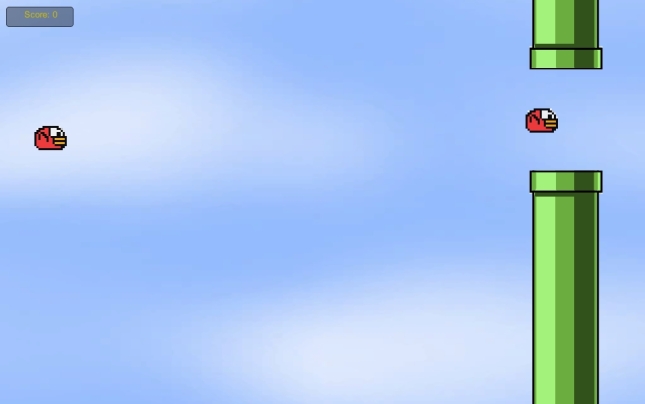 Gonna be honest: I did not spend most of the week on this one. I was actually working on a Match-3 game, and I realized I was jumping into something much more difficult than I anticipated. With the Sunday deadline looming, I needed to get something out, and so I made Flappy Pipes.

That isn’t to say I didn’t learn anything from the experience. It was actually pretty fun! I learned about dealing with physics and gravity in Unity, and also did a fair amount of fine-tuning the gap between the pipes. I learned a bit more about how to handle UI as well. It isn’t just in an entire other scene, and I delayed the “Click to restart” prompt to let the moment of defeat sink in a little.

There’s another major thing I learned: Object pooling. It’s a little technical, but here’s the basics: Instead of creating and destroying objects constantly, you just create a bunch of an object off-stage and bring them into the stage when you need them, saving on processor power. This’ll allow me to design games with way more sprites on the screen, such as shooters.

I also did something I never thought I’d actually do: Make sprites. The pipes and birds are the very first sprites I’ve ever made, and you know what? They aren’t all that bad! The birds could definitely use a lot more work, but they look close enough to their tribute material that you know what’s going on. The pipe is simple, but I got to apply some of my shading intuition from my miniatures-painting. The dark line underneath the wider pipe section really adds depth.

So, yeah. It’s not the most original game, but I learned a lot by making it!