Back to puzzle games. Let’s talk about levels in puzzle design. For now, let’s ignore special objectives, special tiles, and that sort of thing. The number one most important tool in level design is the shape of the level itself. When I broke down level 65 of Candy Crush Saga, I mentioned that tiles on sides and corners are harder to match. I figured I’d zoom in on that specifically, since a level’s shape informs everything else placed in it.

In a tile-swapping match-3 game, your basic verb is to swap tiles, and you can only swap tiles if they’ll make a horizontal or vertical match. Because this is your only verb, all objectives in tile-swapping games are based on matching tiles, whether your goal is to make specific types of matches or to make matches in particular areas of the board, which may become easier or harder depending on the board’s shape. On a micro level of design in this area, difficulty is controlled by how many usable spaces are adjacent to a tile.

The space containing the dark blue tile is adjacent to four other spaces. I don’t think any official standard terminology exists, so I’m going to make my own and call it an open space. The dark blue tile can’t be matched with anything right now, but it’s certainly got a wide variety of options. It can be matched horizontally or vertically, to its left, its right, its top, or its bottom. It can be one of the edge pieces of a match, or it can be the middle. It has the widest flexibility for matching.

Let’s remove one of those possible adjacent spaces and see what happens. Look at the spaces with the blue tiles in the center. I’m calling these walls, though depending on their orientation, they could be floors or ceilings. The first image is much less forgiving than the second, but they’re the same either way: They cannot be matched on their right side. This means that any horizontal match involving them must use them as an end piece and not a middle. For the sake of brevity, I’ll only list the traits of walls oriented to the right. The same principles apply no matter what direction the walls are facing. 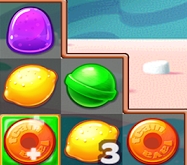 There are actually two possible configurations under which a tile may only have two adjacent spaces. The first is the corner. In this example image, the space containing the green tile is a corner. Let’s examine this one:

The other is the hall. These can be vertical or horizontal. The purple piece and the lower blue piece in this image can be said to occupy hall spaces.

Like the corner space, the hall space is disqualified from four of those traits listed.

Finally, we have the nub, called so because they can only protrude from a larger mass by itself. These only have a single adjacent space, which severely limits their matching options. The central yellow space can only swap or be matched with whatever happens to be on its right. Matching nubs is especially difficult. Let’s break this one down too.

This one looks really hard to match! You’d have to be very lucky or very skilled at exploiting opportunities to take it, but there’s one more kind of space you need to look out for!

That’s right. There are games with tiles that have zero adjacent spaces next to them! Zero! I call these Solo Spaces! What can possibly be done about them? I’m not even going to bother running down the list for this one, because you can’t ever make matches with them or swap them.

However, that doesn’t mean you can’t ever collect them! Many tile swapping puzzle games grant you the ability to create special tiles that can clear an entire row or column. If you see a level with a solo space, that means you need to make very careful use of your special tiles, because those are the only way you’re ever going to touch tiles on a solo space.

Posted by Grant on August 20, 2014 in Game Thoughts, Puzzle Design