Six Chamber Hoedown is a game I made for Insanity Jam 2, a game jam with the goal of producing a game based on a random game concept. It’s currently up for voting.

My random prompt was “A twin joystick game where you obey the loudest wasteful gunfighters.” The first game type that came to my head was a dual joystick shooter, but I decided to play with the prompt a little. A little more brainstorming, and I found a concept that’d mix the theme and gameplay together more tightly and in a funny way:

A game patterned after those scenes in old westerns where one guy says “Dance!” and shoots at the other guy’s feet. Mix that with twin joysticks, and you get a DDR-style game about jumping over shots.

I took some inspiration from the old Ballad of Black Mesa video and decided to create a song made entirely out of gun percussion.

Six Chamber Hoedown took about 10 days to make in Game Maker. I learned a lot about using Game Maker, and overall, I’m pleased with what I created. It might be fun to revisit it and make more involved levels, but I think what I have now stands well on its own.

Also, you should check out This Game Is Not A Dating Sim. It’s another Insanity Jam 2 entry, and it looks really cute! 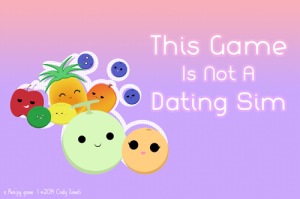