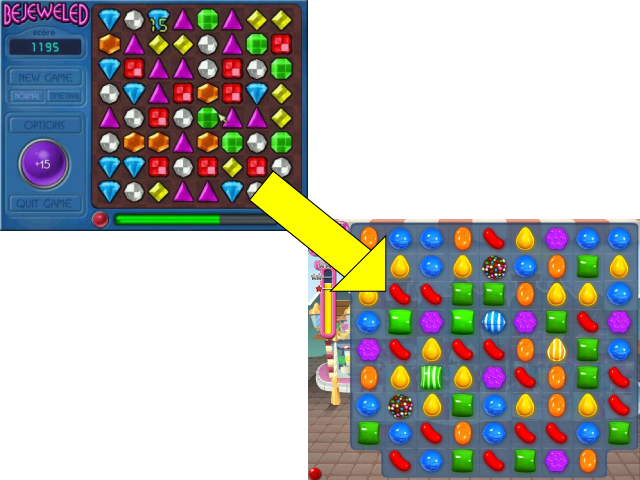 I was playing Candy Crush on my phone on Saturday, and a friend asked what I was playing. I said it was Candy Crush, and I forget how the rest of the talk went, but they called it a Bejeweled clone, and that stuck with me. It reminded me of when people used to refer to first-person shooters as Doom clones, and how for a while, League of Legends was called a DotA clone.

Match-3 games have come a long way since Bejeweled, but why are they still compared to Bejeweled specifically? The first thing that comes to mind is that for many people, Bejeweled was the first Match-3 that stuck with them. They haven’t really played Match-3 games since, and when they look at a modern one, they think back to Bejeweled. Of course, modern Match-3 games are vastly different beasts, although people don’t quite realize it yet.

Bejeweled 2 (My baseline for this discussion) is based around making matches until you reach a target score, then you’re presented with a new level (keeping your special gems) and a new target score. This target score keeps rising (and so would your points per match). However, if you end up in a situation where no more matches are possible, the game  ends. The longer you play in a level, the more likely, you’ll end up in a losing situation, so over time, you need to make more and more of your matches into higher-scoring ones and combos to get more points out of the time you have in a level.

Most modern Match-3 games still have a score, but you no longer lose if you run out of possible matches. The board is just reshuffled. The loss condition is different: You’re given a certain number of moves to reach your goals (the old target score is now just a formality or omitted entirely). If you run out of moves, you lose. Why is that?

You have limited moves instead of playing until you’re stuck for a few big reasons: The first is that the player has a clearer idea of how close they are to losing. Match-3 play is about identifying possible matches, and a fair amount of a player’s time is spent looking around for the possible matches they can make. They will clearly overlook some, and they know this, so if they make a match, they won’t know for sure that the end is coming. They might know it’s near, or it might catch them completely by surprise. “What? The game is over?” Giving the player a limited number of moves more clearly communicates to them the resources they have remaining and gives them a stronger feeling of control over the outcome.

The moves system also gives the designer more control. Many new Match-3 games involve objectives other than scoring as high as they can. I’ll go into more detail on this in a future post, but the general idea is that Match-3 levels can vary widely in difficulty. A designer can create a level, do some testing, and conclude “This level takes, on average, 50 moves to beat.” They can give the players 50 moves, and then the player has an exciting experience where they’re running out of time, but victory is just within their grasp, and they make it with their final move. Or they might lose with just one move left to make (and consider spending money on buying just one more move so they can beat the level).

This is just one way that modern Match-3 games are characterized. I’ll talk about this more later.

Posted by Grant on August 7, 2014 in Game Thoughts, Puzzle Design