Mobile games have been pretty big for a while, and they’ve got a variety of unique challenges and benefits. I’ve been playing a lot of them lately, so I figured I’d talk about a couple of mistakes that have been jumping out at me lately. I’d like to use Shin Megami Tensei and Hay Day as examples. These are not bad games. In fact, they’re excellent examples of their respective genres. They just use some questionable control decisions.

If you’re making a control scheme for a mobile game, please don’t do that thing where you superimpose a fake gamepad over the screen. Design your controls for the device your players are actually using.

A gamepad control scheme works for actual gamepads because the players can actually feel the edges of the buttons. Until apps are able to cause parts of phone screens to push outward to create tactile feedback (and I’m guessing we’ll see this within 15 years), you’re just going to remind people that a gamepad would be a much better input device for the game.

A more widespread problem is that fingers are going to be covering large parts of the screen, and you need to design around that. Take, for example, Hay Day. It’s doing really well for itself. It’s currently the eighth highest grossing app in iTunes. However, it’s got a bit of a problem when it comes to designing around fingers. 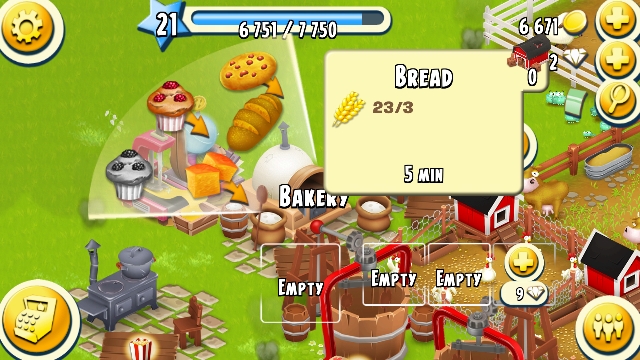 It doesn’t look so bad, right? Hold on and think about this for a moment. You’re probably gripping the left and right sides of your phone. Those baked goods icons are in the center, so you can’t comfortably reach them with your thumb. Your hands shift positions a little. Let’s assume you’re right-handed. Your left hand supports the phone, and your right hand positions itself to use your index finger to touch the icon.

A good user interface is unobtrusive. The player’s finger is now a part of the user interface. The finger should never be positioned in a way that blocks whatever the player is trying to look at. Mobile match-3 games ask you to put your finger over the screen all the time, as do plenty of other mobile games, but this never really takes you out of the experience.

Posted by Grant on September 21, 2014 in Game Thoughts

So you got someone to play your game. Congratulations! If you’re running a free to play game, though, your job’s just begun. You need to keep them coming back as often as possible. You want this new player to become a regular player. How do you get them to come back every day? 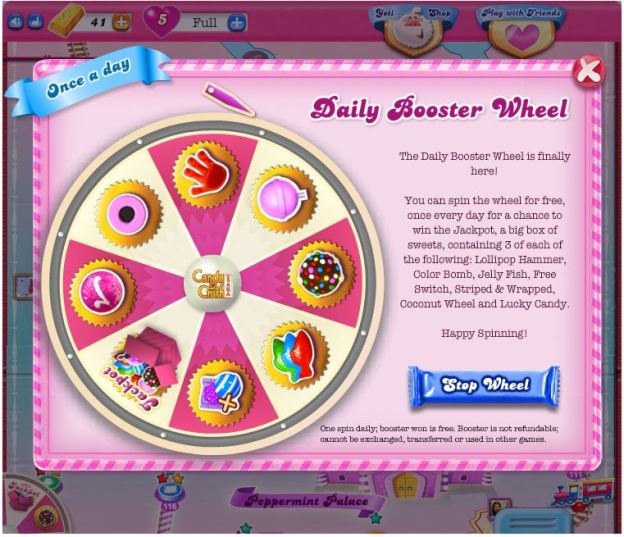 Free stuff! Everyone loves free stuff! In Candy Crush Saga, there’s a wheel in the lower-left corner. It spins and does whatever it can to catch your attention. If you give in to your curiosity and click on it, you get a much bigger wheel that you can click on. It spins and spins until the little clicker thing stops on a space, and you get that prize.

Marvel: Avengers Alliance has a random daily reward as well. A space is highlighted and it rotates quickly through all the different prizes until it slots down and stops on one of them. This isn’t limited to social or mobile games, either. Look at Warframe.

It just cycles right through the rewards until it hands one over. Let’s take a moment and think about these random daily login rewards. For discussion’s sake, let’s go through that phrase backwards:

Rewards: The player gets a goody. Players love that.

Login: The player has to log into the game to get their tasty prize. It isn’t something that just builds up in their game account until they come to claim it.

Daily: This is the really important part. The whole reason this exists is to get users to come back every day. This cool prize is just waiting for players to collect them, and players can’t just log in every few days and collect a backlog of prizes from last week. They need to be in the game every single day. If they don’t show up, they don’t get anything!

Random: This is the part that really fascinates me. You have a daily login reward already. Why have a random element? The job’s done, isn’t it? Technically, yes, but it’s the random element that really makes the random daily login reward (I’m just going to call  it RDLR, not because that’s a real industry term, but because I’m getting tired of typing it.) so effective.

If you look at that Candy Crush image, you’ll see a big box labeled “Jackpot”. One of the spaces in the Marvel: Avengers Alliance image has Loki’s staff, just like in the movie! These RDLRs aren’t just prizes: They’re a VARIETY of prizes. They can be energy, or some premium currency, or a time-limited goody, but there’s always one prize that the players really want. In many of these games, the RDLR that players end up getting is usually a minor expendable resource, but there’s always the chance of getting something incredibly valuable. If the user skips a day, they aren’t just giving up a free energy refill. They’re giving up the chance to get that big prize!

The games make a big show of the random element, as well. A big wheel spins. A light cycles through the options. There are ticks and beeps and other noises that slow down and build suspense. The player might almost get that big prize, only for a last-moment shift that settles on a different reward.

Those “near-misses” are carefully-engineered. Like modern slot machines, there aren’t any physics involved. They generate a random number, likely in the thousands or hundreds of thousands, and have that mapped to a prize. They play an animation to make it settle on the pre-determined prize, and the ticker slowing down near the jackpot is an intentional tool to raise suspense. It reminds the players that those big prizes exist, and that maybe tomorrow, they’ll be luckier.

The daily login reward might seem minor, but it’s a small moment of excitement, right when you start the game. It’s an experience! It’s four to five seconds of fun! It sets the mood for the entire rest of the play session, and it gets the user thinking about coming back tomorrow.

PS: Look at that “Try Again”  button on the Avengers Alliance screenshot. They figured out how to monetize the RDLR! Brilliant!

Addendum: After attending tonight’s SV IGDA meeting, it was brought to my attention that it need not be random at all. It only needs the appearance of randomness. For example, a player who hasn’t logged into the game in a while might log in, and to encourage them to stay with the game, they might be presented with the highly-desirable item.

Posted by Grant on August 13, 2014 in Game Thoughts, Retention